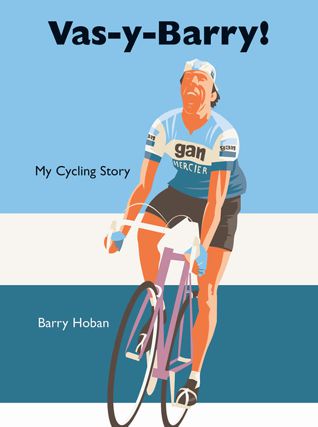 Vas-y-Barry (pronounced Vaz ee Barry) is French for Go on Barry. It was a cry Barry Hoban heard many times during the 19 years he lived and raced on the continent. Hoban was born in Yorkshire, but after a glittering amateur cycling career moved to France in 1962 to race as an independent rider.

In 1964 he turned professional and raced at the top of the sport until 1979, while based first in France then in Belgium. Barry Hoban won eight stages in the Tour de France, and is second to Mark Cavendish in the all-time British stage winner list. He was also the first British rider to win a mountain stage of the Tour de France.

Hoban won the classic single-day race Ghent Wevelgem, the only British racer to have done that. All told Hoban won 32 top class professional races during his career, and he had top three placings in many more, including two of the monuments of cycling; Paris-Roubaix and Liege-Bastogne-Liege.

This is Barry Hoban’s cycling story. It is written by Barry from the heart and with clear recall of what it was like, physically and mentally, to ride against three all-time greats of cycling; Jacques Anquetil, Eddy Merckx and Bernard Hinault. Each one the definitive rider of his generation. Hoban also raced against Rik Van Looy, Rudi Altig, Felice Gimondi, and with team mates Raymond Poulidor and Joop Zoetemelk. But Hoban did all this as a pioneer, very often the only British representative in the world’s biggest races. Barry Hoban made a place in men’s professional road racing at a time when so few had. It’s a place that is still remembered with affection today.